Hit and Run Lawyer Near Me

Hit & Run Accident Lawyer Near Me

A criminal Hit and Run charge is one of the most common charges I see filed by prosecutors in Vancouver, Battle Ground, Longview and Kelso. Regular people can find themselves in sticky situations in the blink of an eye, and the consequences, if convicted, could result in a driver’s license suspension, jail time, court costs and driving classes.

We understand that sometimes people make mistakes once they’ve been in an accident. Sometimes they panic. Sometimes they simply are not aware of their legal obligations. Sometimes they make a snap decision without fully thinking it through. If a hit & run charge is filed against you, it is important to know what you’re up against.

This article will discuss the ins and outs of hit & run charges, so that you can better educate yourself on how to put your best foot forward following an arrest. If you need legal assistance in your case, we offer professional representation and experience in the courtroom.

What Are My Legal Requirements When I’m In A Car Accident?

Were you in a fender bender? What are you supposed to do in this instance? Who should you contact? Are you required to exchange my information? Should you call the police? These are all valid questions. Your obligations depend on the situation.

When you are involved in an accident resulting in damage to an unattended vehicle or property damage only, Washington state law lists your obligations in RCW 46.52.010.

You must stop immediately and either locate the owner of the vehicle or property to give your name and contact information. If you are unable to locate that person, you must leave written notice in a conspicuous place of the other vehicle or property, and you must also make an accident report.

Attended or Injury Hit and Run

When you are involved in an accident with an attended vehicle or an accident resulting in injury to another person, Washington state law lists your obligations in RCW 46.52.020.

You must stop your vehicle at the scene of the accident (or as safely as close to as possible) and remain there to provide the following:

If another was injured as a result of the accident, you must provide reasonable assistance, such as securing medical assistance. 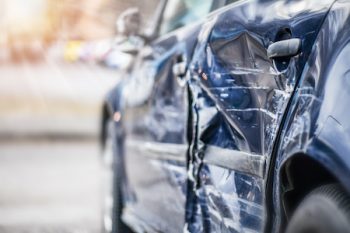 Hit & Run Unattended, listed in RCW 46.52.010, is a simple misdemeanor. If convicted it carries a maximum penalty of 90 days in jail and a $1,000 fine. The Washington Department of Licensing would not take any action against your license as a result of this conviction. Hit & run unattended is defined as you striking an unattended car or object, causing injury or damage, and leaving the scene without first exchanging all the information required by law. “Unattended” means that the car or property was unoccupied i.e. hitting a parked car or a fire hydrant.

There is a “mens rea” component to a hit & run charge, meaning that you must be aware that you were involved in a collision in order to be found guilty of the charge. Moreover, to be found guilty of a hit & run unattended, the collision must have produced damage. If you collided into something but no damage has occurred, then no hit & run has occurred. If the collision did cause damage however, then Washington law requires you to provide the information listed above in this article before leaving the scene (also listed in RCW 46.52.010).

In its more serious form, hit & run attended is a gross misdemeanor, carrying a maximum penalty of 364 days in jail and a $5,000 fine. Additionally, the DOL would impose a minimum 1 year license suspension upon a conviction for this charge. If you are suspended, you may be eligible to apply for some sort of a restricted license.

Hit & run attended counts as a strike against you for determining Habitual Offender Status in Washington. If you are convicted of three charges within a five year period (i.e. hit & run attended, reckless driving, DUI, Driving While Suspended 2nd Degree, any felony involving a motor vehicle, etc), then your license would be suspended in the 1stdegree for 7 years as a Habitual Traffic Offender, and you would not be allowed to drive under any circumstances.

Hit & run attended means that you were involved in a collision with an attended vehicle resulting in damage, and that you left the scene prior to exchanging your information. “Attended” means that the car you hit was occupied by someone.

If you are involved in a collision with an attended vehicle, Washington law requires you to exchange the information listed above in this article (and also listed in RCW 46.52.020). Failure to do so could result in criminal charges of hit & run attended.

In its most serious form, hit & run injury is a Class C felony, carrying a maximum penalty of 5 years in prison and a $10,000 fine. It is a Class B felony if the other person injured dies as a result of their injuries. Hit & run injury means that you hit a person, causing them bodily injury, and that you failed to remain at the scene to fulfill your legal obligations listed above in this article (and also in RCW 46.52.020).

I Have Been Charged With A Crime. What Are My Options?

Your lawyer may be able to negotiate to have the charges dismissed or reduced. If there are issues involving whether damage occurred, whether you were aware that you were involved in an accident, or whether you did indeed provide your information, these are all helpful pieces of information to a criminal defense attorney in defending your case.

Additionally, depending on the facts of your case, your lawyer may be able to negotiate with the victim for a Civil Compromise.

A Civil Compromise means that the victim in the case has been civilly compensated for his or her injuries, and is willing to sign off on paperwork asking the judge to dismiss the case. This option is not available for a hit & run injury charge. Rather it is only available to misdemeanors and gross misdemeanors.

Will I Owe Restitution If Convicted of a Hit & Run?

Interestingly, unless it is agreed upon by the parties, a judge is not legally allowed to order you to pay criminal restitution as the result of a criminal conviction for the standalone charge of hit & run. In Washington, criminal restitution can only be owed if the victim would not have suffered an injury but for the crime occurring. In other words, the crime must be the cause of the victim’s injury.

In the context of a hit & run, the victim’s injury (i.e. damage) occurred prior to the crime occurred.  The “crime” of hit & run is not getting in an accident. Rather, it is leaving the scene without first exchanging your information. Thus, because the accident resulting in damage occurred prior to you leaving the scene, the crime technically occurred after the damage occurred. Thus, if you were convicted of a hit & run only, the judge has no power to impose criminal restitution unless it is agreed upon by the parties. For a more detailed discussion on this, you can read City of Walla Walla v. Ashby, 90 Wn. App. 560 (1998); State v. Hartwell, 38 Wn. App. 135 (1984) (overruled on other grounds by State v. Krall, 125 Wn.2d 146, 881 P.2d 1040 (1994).

That being said, the victim is within his or her rights to pursue a civil remedy, i.e. suing you in civil court. This unique rule only applies to the standalone charge of hit & run. Thus, if you were also cited with a DUI, Reckless Driving or a Driving While Suspended, for example, you would be criminally liable for restitution upon your conviction.

Have An Experienced Accident Attorney In Your Corner

Hit & run charges are serious. They can alter your life in an instant. I always advise my clients to have insurance, because any driving offense can get really expensive really fast. If you have been charged with a hit & run, contact our office for legal representation. We offer a skilled legal defense at a cost you can afford.

Posted on January 6th, 2021 by Thomas Carley
Hit and Run Lawyer Near Me

Celebrate the Holidays Responsibly in Vancouver WA
|
What Is Deferred Prosecution In Washington State?